On the eve of the first test between the Saffers and the Poms, some exclusive, useless piece of news have come to my attention. I cannot help but share them with you, although I must tell you ladies should have easy access to boxes of tissue before reading any further. 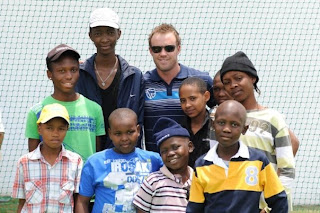 He might be brilliant at everything in the world, but AB is short. In case you still haven't picked him out in that picture, he is the one with glasses (needed urgently to separate him from 10 year olds). While many will see this as a shortcoming, literally, this may be the secret to AB's brilliant fielding. Small masses are better at defying friction to leap miles up, down or sideways after all.

But AB still has a girlfriend 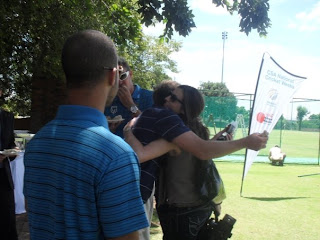 The use of the word 'still' is misleading, as George Costanza will no doubt argue, but the rest of it is true. My trusty Saffer gossip fairies MJ and Milly have informed me of the following. You might think it is just a hug but if you click on MJ's link you will see a picture of the two gazing into each other's eyes. Also, this bit taken from Carly's blog (she is a journalist and a blogger) can be twisted to spread gossip.

"I also had to interview AB de Villiers, which was interesting, to say the least. And not just because he said some fascinating things"

While I am happy for AB (You, bawling in the corner. Be happy for him), I sincerely hope AB won't let this get in the way of his cricket. Like his brown hair did.

Morne also has a girlfriend

This bit of information came exclusively from Morne's facebook page, where he has changed his relationship status from 'single to in a relationship'. Before you brand me a stalker, I googled him and bumped into this. And even if I am a stalker, I suspect your boyfriends are really grateful because now you can go back to giving them attention instead of lusting after Morne. Morne is taken girls. Stop crying and wish him well for the upcoming test. 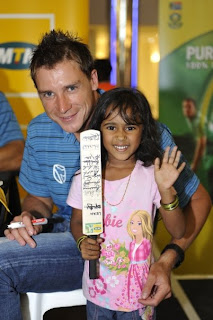 To stop management from checking him into rehab, Dale has finally shown us one of his grand kids. But, she seems to be a fan of Stuart Broad, as her t-shirt suggests. I think Dale's crap addiction is making him do strange things. Maybe, it will also strangely make him bowl well.

Right, that's all the news for today. Tomorrow we come back to talk about the Saffers playing cricket. Hopefully good cricket.

Finally we meet Dale's grandkids, what a day to remember ;)
Not a great start to the test, Biff is probably somewhere else these days, but Kallis and little AB are going quite well at the moment..

Whatever will we ever do without Kallis Gabi? and I am sooo worried about the bowling. Stupid Steyn!

Purna r u serious?morras has finally got a chick,so long after lamenting for being single?has he made this relationship public?who is this mystery lady?& if all this is true.... well... i hv to say... IT'S LADY LUCK THAT GOT MR.MORKEL BACK TO THE NATIONAL SQUAD!!haha..if update any info u have bout this...

Purna, have you pics of Mornes lady, I know I am been very nosey but would love to see her, she appears to have made him very happy, getting back in the team, and all. good for him.

Sorry girls, but I got Morne back in the squad. With my campaign. And Herschelle too :).

I have no idea who this mystery lady is. He is either hiding her or she doesn't like the limelight. Will look out for some pictures.

Hi Purna,yes the news is confirmed....!Morne Morkel has got a gf!!!!a rather attractive one.... i read ... so for the girls lusting after him .... its really time to get over it!!!!
Here's the link...
http://www.addisarmycricket.co.uk/tour_diaries44.html

Pls do try to get some pics of this would b missus morkel as soon as u can...

Haha. Thanks for that. Will have a read as soon as I finish this god damn paper I have to write for school!

I will have to fly to Saffaland. If you guys fund my ticket, I will hunt his girl down and take a picture.

Guess AB has got a girl too!!But the news is NOT confirmed.... pls dont hate me like a bringer of bad news.I write only what i read...he was pictured with this lady at the England welcome party.Her name is Carly Weinberg, she is a jewish journalist.Here's the link
http://www.facebook.com/photo.php?pid=2887670&id=88795929350