Moises is a captain

I'll give you a minute to stop laughing.

So Stuart Clark was injured, more like depressed about his Test rejection, and NSW decided to announce, and I quote, "Australia's Golden Boy" as their captain.

This is where I remind you guys that Kieron Pollard likes to eat Moises (I have a crappy name) for breakfast, lunch and dinner. Moises has 24 First Class wickets, since his debut in 2006 and 25 List A wickets. I have no clue what List A is, but what about this record sounds golden? WHAT about this record makes him stand-in captain worthy?

Having talent is something else, but you have to be able to execute that into records to achieve something. People are praising him for playing a captain's knock because he added 65 runs to his top order's 207 in the first innings and took 3 wickets overall. And still lost. How very shocking!

It might be a tiny glitch, but I have heard that Australian players are bred to be the absolute best because at no point during their training are they given anything that they do not deserve. Even if it was their dying wish. And this is the Sheffield Cup, where most of the tough bastards are born.

But now, Shane Watson is still over-hyped, they can't find a decent wicket-keeper and modelling queen Michael Clarke is going to one day lead the Aussies in tests. The very thought of that sends my into hysterics. Do you see anyone in the team respecting this man as their captain? 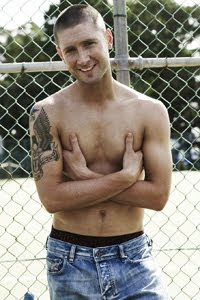 A good batsman, yes. A team man, sure. A friend, maybe if he puts on a shirt. But a captain? Every time he gives an insipirational talk, his team-mates are going to picture him topless, hiding his privates with his fingers.

What is wrong with Australian cricket?

A man who sticks his hands into his sweat glands is about as sexy as Mark Cosgrove (sorry Mark you know that I love you, don't you).
Imagine he touches your face afterwards. Oh the yuckiness.

Yeah Moises captaining was one of the funny and hearty little domestic highlights in the last days. The other was Timmy returning to his team after injury, and winning.

Moises is evolving into a sort of anti-hero. He may be shit but he is utterly likeable hehe. Well I think he is just overchallenged, too much expectation.
Shane isn't overhyped, you only say this because you hate the Aussies :D

Imagine Ricky Ponting shaking your hand after spitting in them a thousand times. Even more yucky.

Shane is very much over-hyped. You will learn over time my friend.

You will also learn to love the Saffers over time ;).

o.O
I am physically unable to imagine any contact with Punter without a computer screen between us.

Purna I do love the Saffas. Two of them... but I love these two so much it makes up for the entire rest :D

Has it ever occurred to you that it is not a coincidence that Smithy is a Cobra and CJ is an Eagle. It all makes sense. Eagles = nice, Cobras = cubic.

And as I am writing this my third favourite Saffa goes out to Binn. Bloody hell :(

You like Smith, CJ and AB? Hmm...we need to train you a little more :P.

I like fatboy believe it or not. I always have. Fatboy is probably my favourite saffer, though I am partial to AB. Really pissed me off today when he got out to that swanndick.

I don't think Watson is overrated but then I have never particularly rated him except as comedy material. I don't even find him pleasing when he does genuinely excellent things like play well in CT finals. He still seems like a dork.

The Moises thing is a bloody mystery. But then he is from NSW, so you don't actually have to perform to get handed the state captaincy or a call up for national duties. ie Steve lmao Smith.

Vim, Graeme and Jakes are both Fatboy? No, no, no. You must not compare the buffalo with the genius. AB's wicket pissed me off too. Sometimes, I want to smack him.
I'm guessing you are not from NSW?

Added Friedel to the list *sigh*
Smithy. Is. NOT. Fat.
You guys just gave him a nickname that implies fatness (that's why I never use it). Okay, okay maybe he isn't not fat everywhere. But apart from that he is NOT FAT.

He was fat up until recently. But he will always be fatboy in our books.

And if you meant Buffalo, we didn't give that to him. His team mates did. Biff means Buffalo. MUHAHAHA.

Purna I know how he used to look but, someone has to defend him just for the sake of it B)
Also, his special sort of fatness lies in the eye of the beholder. I am a very tolerant beholder :D