The mystery of KP's beard

He was sure that they were going to make life hell for the new boy. After all, he too had left his motherland and done splendidly in England. Sure, he didn't have the obvious tattoo or the obnoxious hairstyle (come to think of it, he has no hair). He even admitted to still knowning his mother-tongue and chatted with his former team mates in Afrikaans. He smiled at them sweetly when they fondly called him 'Trotty'. BUT, he became a Kolpak! Why wasn't the crowd calling him a traitor?

No, he did not understand it. Instead of focusing all their energy on Trott, they were still shit-talking him! AFTER he had openly declared the standing ovation he got in his last visit was special. AFTER calling their number one all-rounder the best cricketer in the world. They are still on his case. Like they were last time. Despite the fact that there was a new Kolpak around.

Why cruel world? Oh, the injustice! The unbearable pain! The incessant tears!

But wait, there is a solution. A saviour! A brilliant plan! A DISGUISE!

No one will question it, thanks to Hashim Amla.
Dean Jones is not around.
W.G. Grace had it (the English connection).
Why not? 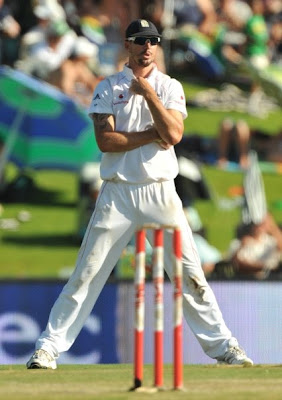