The era of English cricket?

This is no celebration. This is a question that may very well make or break my existence.

Do I live in a world where English cricketers are...well good?

This is not to say we haven't had some top English cricketers before. But winning games? That's new. Winning a World Cup and then becoming the number one test side in the world...well that's just fucking beginning of the earth kind of stuff isn't it?

They are a team that worked their way up and that definitely says a lot about them. I mean, this is a team that decided KP should captain them for fuck's sakes! They put their hope and dreams of a win on a man named Mascaraman. One of their go to bowlers distinctively resembles a little girl's doll. More often than not, that bowler bowls like a doll, without any brains.

Knock, knock. Who is there? Nobody. Cuz this is Stuart Broad's head.

But these bunch of jokers seem to have been offset by the powerful Andy Flower, the capable Jimmy and dare I say it...the *gulp* intelligent Andrew Strauss.

What is going on here? Who are they? Where have they come from? How did they inspire this attitude within the English camp? And why do I feel that the list does not end with these three? That there are more, brewing, inspiring, invoking an era of English domination?

I don't get it. Probably because when the Windies and the Aussies dominated, their teams were made up of snarling beasts who glared, bullied, towered, basically mafia-ed their way through the cricket world. The English team however are easy to overlook. Mostly because of their reputation and their predecessors of course but look how sneakily they rose to the top. So gently, so politely. Almost apologetically.

"Pardon us good sir, but we will sit here at the top if you will let us please".

Where is the arrogance? The attitude? The aura of champions?

I don't think this one counts though.

One has to blog to count a complete year right?

Okay, back to zombieland.

Somebody married the Buffalo. 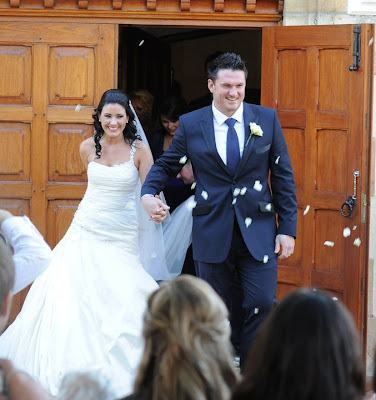 Does she know he has the magical power to get bigger?

Whatever. Maybe this will at least cause him to play better cricket.

Why should I return?

Have you been watching cricket recently? HAVE YOU?

England, on a quest to be the number one test team of the world, have magically tapped into their inner winner. I didn't even know such a thing existed with the Poms, but there you have it. They are kicking ass. Even Mascaraman is a winner this time around. He must have dug up his inner champion from someone else's grave.

India are on the receiving end of this new English attitude. Supposedly, they too are vying to be the new Australia (world champs+test champs+piss everyone off champs). A poor choice of ambition, considering their bowling attack consists of a staggering nobody.

But wait, who makes up England's bowling attack? James Anderson...and the obscure one hit wonders.

iLaugh.
India dies.
At the hands of a Barbie doll.

Then we have my countrymen who have attempted to disguise themselves in horrendous orange, lest they fail. I appreciate it, because it shows they are thinking ahead. "In case of yet another embarrassing performance, wear a different coloured uniform. All stones will be diverted to the wrong bus anyway".

Well Bangladesh, here's a line for you: If you try again and again without success, failure may just be your style.

I am beginning to believe that.

How can I end a post without talking about my beloved Proteas. Who you say? I say the same thing. Who are these non-existent, fleeting men in green who only show up for certain periods of the cricket season, and never stay for the climax?

So in a nutshell, this is the era of England and India (not choosing since I can't bear it to be the era of either), Bangladesh will replace Zimbabwe in the number 10th spot and the Proteas are too busy being degenerates.

Nobody loves me.
Posted by Purna at 4:11 PM No comments: