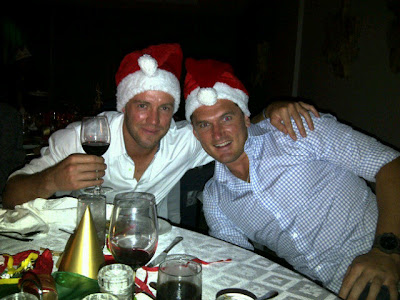 Just in case the holidays don't bring a lot of laughter and joy in your life, I put a picture that surely will.

What is up with Graeme's face?

And when will AB stop wearing white?
Posted by Purna at 6:02 PM 7 comments:

Life is a cycle. Hence upon coming back to life I quickly died for a second time, because people thought a very good welcome back news would be that of Bhajji scoring a test century. It was instant death. No time for goodbyes. Hell not even time for the last gasp. Shame on you!

Australia is also in a cycle. It's called the shit cycle. Sometimes the cycle breaks because really shit is not circular. Shit just piles on and makes things shittier. I don't mean excretory materials, I mean shit that happens. But when you yourself are the shit that happens to...yourself, what can you really do? Think about that sentence long and hard. It's not that complicated. It basically means Australia had a fabulous third Ashes test series again and Mitchell Johnson was the main reason behind it. He swore at the press, Australia became all cocky again and England crumbled. Sounds familiar? No children, your life is not in repeat. Australia is. The only factor that's different here is that the next test is a Boxing Day test, and Australia have never lost those. I say never because I am too lazy to do research. But I am sure it borders on never. But does that really change anything? England is still the better team. Please do not ask me to explain that sentence. I've already ripped my heart into pieces typing that.

Not everybody is going around in cycles. Kallis just broke his cycle of getting close to the 200 mark and jumped right through it. I didn't know if it (what else did you expect?) till I went to Cricinfo and saw a picture of Kallis' hair. By now the picture has become legendary, so I won't bother putting it on here. But I will tell you that I actually started reading the caption because I thought Kallis had batted for so long that he had actually started growing hair. I mean it's Christmas time and he is 36. One of these days Santa had to give the boy what he really wanted right? It was only then that I realized that he had actually batted to 200 runs, not 200 days. I celebrated his achievement by brushing my own hair.

He has inspired me to break this cycle of absence that I have been stuck in lately. We will take it one day at a time. Don't get your hopes up, but know that I am trying.

In case I am gone for a long time, I will leave you with this very thought-provoking question: Am I Mitchell Johnson?
Posted by Purna at 11:43 AM 3 comments: