Put a leash on Morne 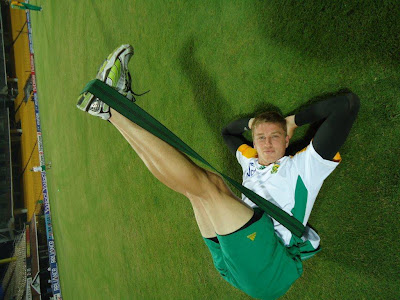 Right, World Cup time. Meaning time to get off my lazy ass and actually start blogging. Will only last till the semis anyway.

Yes, I did just say that. I have done much soul searching during my absence and have realized that sometimes being negative actually attracts negative results. And when you support Bangladesh and South Africa, even positive thinking, brings negative results. Put the two together and you have two negatives cancelling each other out to bring a big, yellow, positive smiley face. Much like AB's hair (I swear it knows how to smile).

So here we go, a new beginning for the blog with the same old but slightly modified negativity and a big bag of love for Bangladesh and South Africa. It only makes sense that I put a video of Bangladesh's victory against Kenya in the ICC trophy, which allowed them to play their first ever World Cup (where we beat Pakistan...muhahaha). I think I mentioned it somewhere before and as you can see, I got the details quite wrong. The six I recall being hit was earlier in the over and although it WAS our bowler who made the winning runs, it came off a single- the most famous single in the history of Bangladesh cricket. Yes, it is that dramatic. See it for yourself.

P.s- the video quality is shit. What did you expect? This was before Paris Hilton showed us what you can do with a camera.