What about the invader?

As expected, I see posts after posts on Afridi everywhere. But spare some love for the pitch invader guys. It's been so long since we have had one. Roy shoulder slamming one into the ground is the last incident that comes to mind. I must point out that Roy is one secure man. You would have to be, if you suddenly decided to come in physical contact with a naked guy.

Apparently the pitch invader has been banned for life. I am very, very upset. I mean c'mon! All he wanted to do was give Khalid Latif a hug. He must be so shattered that the Pakistan U-19 team lost to the Aussies in the recent world cup. Latif was the captain of the winning Pakistan side a few years ago after all. Then you have the IPL snubs, the constant drama and not one captain that can live upto their title. It must be exhausting to be a Pakistani cricketer. All he did was recognize their pain and tried to make it go away. 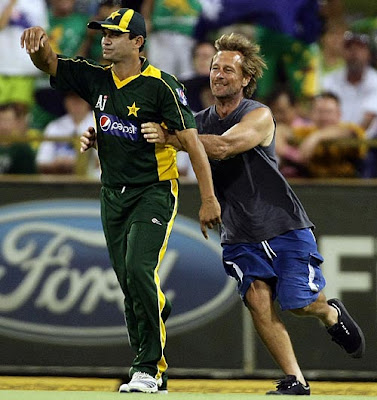 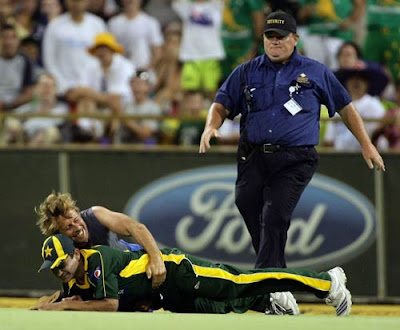 The security guards were upset because this guy made them run when they could have used that time to down beers and donuts. That's the only reason they pressed charges against him. Spiteful!
Oh well, at least he got groped by four men in return. 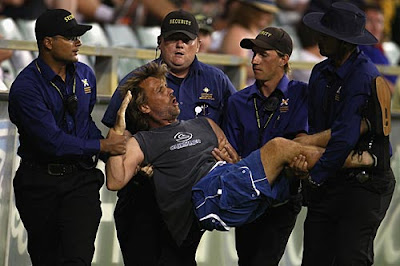 Look up India's tour to New Zealand and the first Test of the Ashes 2009 for more examples.

you might also want to look up Champions Trophy 2009, the India Pak encounter.

I was also quite upset about the pitch invader's ban, since it seemed in fairly good humour - but then missjane and I came to the (obvious) conclusion that he was a Bloody Vic visiting W.A. for the match and now I am all for the lifetime ban.

We don't want that kind of Victorian behaviour going on in the West.

Hi Homer! I did remember the India Pak encounter. But that was after the game and it was fun! I didn't see your other two examples though. Sad coverage of cricket in sad igloo land :(.

Sid, then I am pretty sure he was a friend of Bloody Cam. He orchestrated the whole invasion!