It didn't happen. Crapinfo just made some random scorecard up. They need to stay employed. And Baz was dreaming.

I mean Nathan McCullum bowled and picked up two wickets. Clearly this was some fantasy world.

The only thing that made me think twice was the fact that Dan played and picked up the highest number of wickets. But this is not Dan and this not New Zealand. They would never wear KFC on their shirts. That's what Aussies do. 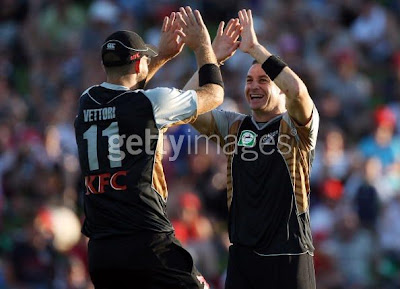 Thus, as you can see, that even though the scorecard looks like Bangladesh had 'played', New Zealand never did. So the game did not happen.

If you actually saw the game on television, congratulations! You need to be checked into a mental institution. Specially if you watched Bangladesh bat.
Posted by Purna at 3:47 PM

Yes Purn it was just a terrible fantasy conceived by a masterful mind! It was just a plot to make New Zealand look good, how kind of the Bangladeshi boys :)

Sorry Purna,it did happen. I saw it with my very own eyes. The good thing is your boys can only get better!

M, your optimism warms my heart. But I wouldn't get my hopes up!

I had a KFC joke. Damn it should have written it down.

Purna what Marty said is the only way for them to get better, going out and playing the entire world. They need to learn how to play on all these different grounds, but it takes time. I am hopeful :D

I would like to exchange links with your site www.blogger.com
Is this possible?