Wayne is more than a cowboy

I just realized that when I was twenty, I was dreaming about saving the world. I thought that I had achieved something, as my full proof plan turned out to be both practical and fun. Basically, I thought of unleashing King Kong, Godzilla and Nessie on the world so they could rebuild the earth from scratch. All normal things for a twenty year old.

But Wayne Parnell is a different story. By the time he hit twenty, he had received a national contract to represent his country in a very popular game. People all over the world knew who he was and were sure that one day, he was going to be one of Saffaland's greatest fast bowlers. On top of that, he can also bat. Just never gets the chance.

Now, he represents his country in pimping white outfits as well. The normal thing for this twenty year old is to travel, play a game that he loves and party...in different parts of the world. On top of that, he gets to sit on a chair with 'Police' written at the back of it, holding the coolest camera in the world, wearing a TOWEL. 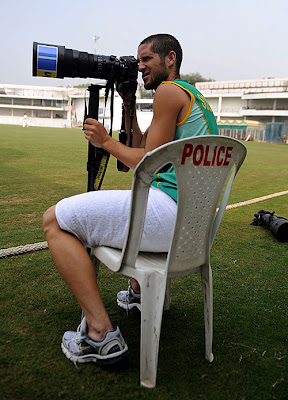 If it were anybody else, their ass would have been hauled into prison for indecent exposure. With a camera too. Very suspect. But not Wayne. Wayne, he is allowed. And all because he bowls with the wrong hand.

Thank you for making me feel inadequate Parnie. Thank you very much indeed.
Posted by Purna at 3:00 PM

Feeling inadequate due to a man in a towel? Was your nationality the only thing I was wrong about? :P

Mahek, HAHAHAHA! NO! But why does he get to sit on a chair with police written on it with that camera? I also want to do whatever I feel like.But not necessarily in a towel..

Well you could write "POLICE" on the chair in your room and take pictures of the India-South Africa game on TV. In a towel.