Why state the obvious? Because the selectors have the daunting task of choosing the one that is less horrendous for the upcoming test.
Fortunately, making a comparison of crap is much easier than making deciding between the best. For example, if Parnie and Tsotsobe were fighting over the third bowling spot (which they are-Ryan McLaren is in the scuffle too), things would be tougher. If we were to go by yesterday's performance in the warm up game.

But the grass IS much greener on the other side. Take Paul Harris' crap figures in yesterday's game into consideration, and they scream FUCKING PISSOFF/CON-ARTIST/BATSHIT! Or simply 12-0-71-5.91.

Then, when you are all cried out, you go take a look at Johan Botha's figures. Botha is the man right? Our capable vice-captain. Well, okay. As much of a man as you can be with 12-0-44-1-3.66. Slightly better. Botha may not be batshit but I doubt he has the skills to win a test match.

So it's a classic case of shit vs shit. And although it looks like Botha may have won this round what about their other skills?

Botha's short, sometimes sweet-sometimes bitter, high variety batting. In the ODI's. We can't remember what he used to do in tests. Whatever he does, he will be reported for chucking. Or maybe it's baseball when it comes to the batting action.
Versus Harris' jolly, "I want to score a century" batting. Never will he score a century, yet when he goes out, it seems to be his sole purpose. The whole time he bares his teeth like he is in a romantic comedy. But at least we remember how he bats in tests. That makes the score 1-1.

Then we move on to the fielding. None of them are known for their impressive fiedling skills. Sure, a good catch here and there, but it's only when the ball decides to land in the soft hands of a spinner having been roughed up enough. They are the manicurists of the cricket world. Batsmen are the pedicurists, with their dancing feet. Fast bowlers, they are just callous and unpolished.
So the only way to decide the fielding category is to judge who makes for more pleasant viewing.

Botha has an okay face, proportionate to his body and a nice shape. However, Paul Harris has that hair that has a life of it's own. Very entertaining to watch. We don't even need to go beyond that.
But Paul Harris is also too tall, which leads to neck sprains and back aches. Not to mention being unable to look where we have been looking always, straight ahead, at par with our eye level. It's very annoying.

Then, in a completely unrelated category, Botha can fly. 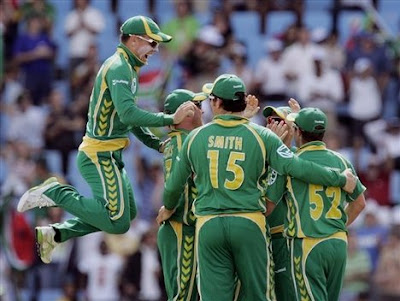 It's unfair I know. Giants can't get their mass to move upwards, but Harris can't get his ball to do that either. So it's 3-2 to Botha.

Congrats Botes! You are the chosen shitty one.
Posted by Purna at 12:35 PM

Scorecard looks familiar but still interesting enough. You forgot to mention Botha and Harris also have 5 NBs each hehe. Okay Parnie too but he took 3 wickets, see the difference. I can't see how Tsobie should pose a threat to him. Go Wayne :D

I think I had offended them enough with the stats you know. I wonder if Harris will actually be chosen over Botha in an act of utter stupidity.

But can Tsobie bowl 7 overs without getting injured? He's spent more time on crutches than on a cricket field the last few years. I don't know if I trust him to last a whole test match without is arm falling off...

Unless we get him prosthetic body parts. Eyes, nose, wrists, fingers. That should be a concentrated charity effort. One dollar from every ticket sold goes to the Tsotsobe body parts Foundation.

Yes Pu but shouldn't he have picked up 1.5 wickets according to this calculation? :P
I still have the nagging gut feeling Botha deserves a go. Pity they couldn't sort that problem with the guest spinner out.

~ Play For Country Not For Self ~
The blond, the fat and the hungry

i don't understand this fixation of playing a spinner for the sake of it...

SA have won in india with all pace attack before and i don't see any reason why they can't repeat the feat...

tho i found this team more susceptible against spin than the earlier ones which toured india...

I think the idea is that the wicket will turn and then the spinners could at least pick up a couple of wickets right? Hopefully!

The onus of the bowling still falls on the quickies.