My Herschelle turned 36 today. Happy birthday baldy! I didn't bake a cake, because I don't know how to. But I am contemplating getting a caramel mousse to hurl at his detractors. Then wrap them up and ship them over to Gibbs.

Herschelle Gibbs has been very embarrassing as of late. I don't care. His ODI batting average has dropped to a miserable 36.30. He doesn't even play tests. I still don't care. Mostly because it's his birthday today but also because even with all the inconsistencies, controveries and stupidity, my Herschelle remains a threat on the field. Even he doesn't know which days he will burst open like soda can and dampen the opposition's mood with his prolific strokes, let alone the other team. It's just the way he is.

At 36, most have written him off about 243255 times. Many cricketers would also have contemplated retirement. But my Herschelle will continue, we will just have to modify the game for him a bit.

He will field in a wheel chair that will propel upwards/sideways on command so that he can still take his spectacular catches. As for run outs, we will just have to make the wheel chair change shapes so my Herschelle can dive on the ground.
He will bat while bent on his knees since he might get tired from standing. He can do it. His abs are hard core and of course, he will train his knees to dance like his feet.
He will run between the wickets using a walker. A wheel chair may ruin the pitch. We just have to make sure Andrew Strauss is not the opposition captain.

Of course he will continuously smack any retirement suggestions out of the ground, every time. Even at 75. Even at 175. 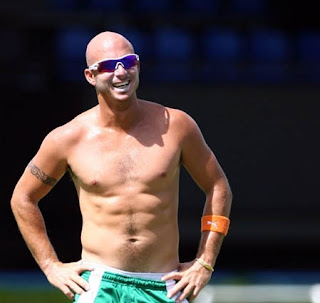 This is the future of cricket children. I am sure of it.
Posted by Purna at 1:08 PM

Hey Purna, its been a while. We have been missing you over at Maza786/BoomBoomKorner :) !!!

I suppose your are looking forward to England in Bangla !! It will be nice to see the Bengalis win a match or two !

Oh my God, he's going to be cricket's version of Professor X from the X-Men, isn't he??

And Chris Gayle is Cyclops! That would at least explain why he wears those shades all the time...

We have also been missing you at playforcountrynotforself *sneeeef* but! How's the Broadway performance going, everything good?

Sorry Maz, things have been hectic. I am barely here. Will visit you when I am back properly :).

Reina, Gayle is a villain. He plays for the other side.

Wes, sorry! Everything is still hectic! So can't say..but it's going!

"Herschelle Gibbs has been very embarassing as of late" - it's the lack of shirt, Purna. Please, I beg you - make him put one on!!

My eyeballs are melting ...

Psht! You can't take your eyes off him! He is much better than your moobs.