Unfortunately, you are a celebrity 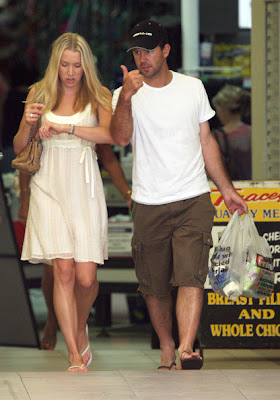 Who would have thought? Captain of the World Champions, one of the best batsmen of his era, gum chewer for life, mass producer of saliva, hair factory- those are the things that we associate with Ponting. But buying milk and toilet paper? Never.

Which explains why there is a whole album dedicated to this epic happening, containing the exact same picture as above about eight times. This is bigger than any double century or ICC tournament folks. This is Ricky spending time with his wife and then getting scolded by her for being late for some appointment. I didn't astral project to Ozland and eavesdrop, this is the caption at the bottom.

Next, there will be a photo album dedicated to Ricky sleeping. How does Ricky sleep? Curled like a fetus? Or straight like a log? On his right side or on his back? Does he snore? If so, does he sound like a car horn or like a flute? Or does the hair in his nose make a different tune of their own?

We can only wait in anticipation.
Posted by Purna at 1:05 AM

It is a bit of overkill, isn't it? One picture would have done. Although I have always liked the idea that Rhianna keeps him in line.

Interesting board to Ponting's right.

Thats what it take to have a wife which look like your daughter :P

You gota do something to makeup for that :D

or is he just a gentle man picking up weight for his wife? I suspect ;)

Sid, is that why Rhianna doesn't go on tours? Because Ricky likes to misbehave abroad?

Mahek, what rights? I want to see more of these. He belongs to the public.

HAHA. Maddy she doesn't look like his daughter!! I know because I saw his daughter's pictures. They look different...;).