Apparently, his Fatness had a birthday on February 1st. I just found out, so I could not have warned you guys in advance of this fateful day. But what would have been the point anyway? It would have been about 29 years too late.

His Fatness celebrated his birthday in India by doing press conferences. Sometime in between the team managed a cake, which he only got to enjoy for about twenty minutes. I suspect that's all it takes for Graeme to inhale anything.

Then his Fatness celebrated his birthday by getting out to the 21st ball of the day. And he made a declaration so late or so early (depending on whether you want test cricket to be saved or watch Hashim break Graeme's record), that we wanted to give him some more birthday presents, wrapped in glittery fists.

Anyway, I really wanted to wish his Fatness a simple Happy Birthday, but the usual crap got in the way. On second thought that's the way he captains. So maybe this is fitting.Not that he will get it. 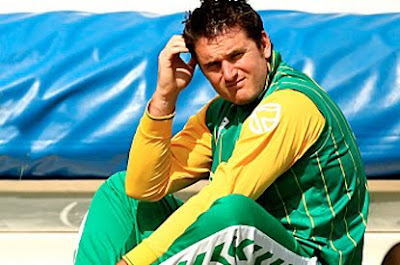 If u had visited http://sloshedcricket.blogspot.com/2010/02/bbotd-something-biffy-about-it.html u wud not hv missed. :)

He enforces the follow-on. Oh Smithy...

The only bday I remember for February is my Herschelle's. But evidently, AB's is also coming up.

Wes, I fell asleep just before the Steyn act. So mad!

oh Purna are you serious? Don't you do proof reading before posting? How can you write 29 instead of 39 if not 49, damm he is too much to be 29.

Well at the moment he weighs as much as a 12-year old, and he will keep shrinking, trust me, weight loss is addictive :/

Maddy, forgive me. It was a critical error.