It's too late to do a post on the test now. Amla was more than great, Morne and Parny did their best, Ashy P played a stupid shot that opened the door for India and the Saffers should have drawn this one and taken the series. That's all you need to know really.

Strangely, the same shit has happened in the first ODI. South Africa has become a one man team; the rest are all in hibernation or handy tail-enders that can only take them close, but not win the match. However, I will look at the positives because everybody needs a change of direction at one point...specially South Africa.

1) Three run outs: I am not suprised. This is what happens when my Herschelle is on the field. How else do you explain the difference between Saffa fielding in the second test and today's ODI?

2) Dale Steyn's batting: Everytime I willed a six, he did it. Meaning, the positive is really my ability to control Dale's mind but we will let him think it was the dog. 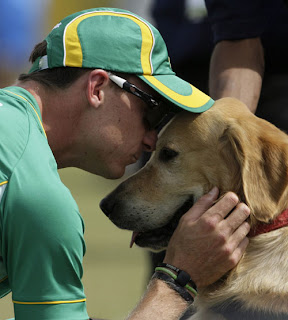 3) Parny's batting: We will ignore the fact that he got run out in a painful fashion off the last ball of the game, reopening some very badly stitched wounds from a certain game about eleven years ago. Why? Because Parnell didn't bat at number 10 and he didn't forget to run...he hesitated. Feck!

4) My Herschelle's batting: Okay, it wasn't that great. But the six and the fours were very good previews of what is to come if he plays some more. Plus, he seems to have lost more weight and is looking very much like the Hersch of 2005. Sometimes, appearances mean everything.

5) No Biff: Very pleasant on the eyes.

6) Albie is back: and still petrifyingly ordinary at bowling. It's a positive because maybe someone will finally smack him in the face and tell him to focus on his batting.

7) They didn't choke: I thought about this one long and hard and I have come to the conclusion that they didn't. Parny and Steynkie looked very much like they were going to win this for the Saffers. It really took a very well directed slow ball from Kumar to end Steyn's onslaught. Even after, Charl and Parny looked relaxed. Something about their body language says 'fighter' not 'worried...cough, cough..gag'. The good news is Parny is the new generation and brave. So as long as 'choking' is not a required course in the South African cricket schools, we are good.

8) Charl's short ball: It seems to surprise the batsman everytime. I bet he could bowl six in a row and give the batsman six heart attacks. It's really quite strange. Something tells me the ball wears a 'I'm not a short ball' tag in the front and a 'You are a fool' tag at the back. Quite tricky to spot in a round ball.

And they still managed to lose...
Posted by Purna at 2:01 AM

I think we cheated you the match....
That Sachin dive was a four....

The Charl short ones aren't really special, it's just India.

If you were complaining about the series being not interesting due to the short duration.. India made up for it in the match!!! An easy victory made into a thriller..

Didn't know they were playing today. Checking scorecard and commentary. Oh please no, please no! ó_ò
How can they do this to John :( Oh the tragedy. I am sure we are soon gonna see a movie with Sharukh Khan as Wayne Parnell. This is one Ancient Greek drama :(

Love how Steyn cuddles the pup, doggies are so nice :)

Chris, thanks for admitting that!

Trideep, I never said it wasn't interesting. It was too short for sure.

Wes, Wayne did it to himself :P. He was the last wicket. If not he had finished the run, it would have been a draw!

that was a four that sachin 'saved', but then had it been given as such, the margin of victory could have been greater!

It was given as a save Ankit.

wait. why is Parnell called John?

'John' Wayne Parnell B)
(rides in on a buffalo)

New Zealand getting played by Redbacks
(and the whole minor rest)