South Africa may have a death bowler

It is a bit disconcerting that the candidate is a redheaded Britney Spears by the name of Rusty Theron, but apparently the man doesn't strut his ball around the way he struts his ass. Which is kind of a relief because I don't think shaking the ball left and right constitutes as bowling, and the Saffers kind of picked him for the World T20 as a bowler.

Rusty's inclusion in the team is possibly in place of Wayne, who is injured. It should also be mentioned that Wayne gets wickets in T20, so if Rusty gets a game, he will have to work very hard. Dale and co. are kind of...well failing to get batsmen out. I don't know how that works, because Dale is actually bowling well. Anyway, we will bitch about that later. For now let's focus on Rusty.

I said before that Rusty may not get a game. But that was before he became Punjab's chosen one for the death overs. Rusty DOES get wickets. South Africa is terrible at cleaning up the tail without giving away an appalling number of runs, and I feel Rusty can put an end to that. I'm not referring to just the super over against Chennai. There was nothing really super about that over anyway, other than the one ball that got Hayden. It was a good over, but not super.

That doesn't matter. What matters is that Rusty bowls a mean length and despite being a tad suspicious on the dance floor, is pretty effective on the field. He even has a mean face: 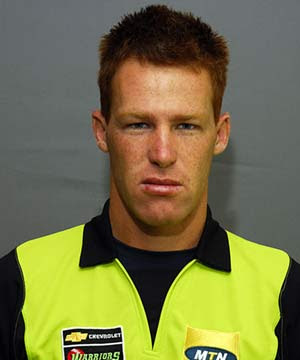 Maybe it's because his name is Juan "Rusty" Theron. That would piss anybody off. But as long as he gets wickets for South Africa, I will happily join in the anger.

What am I saying? I will happily join in the anger anytime. But the wickets must be taken, Rusty. They must be taken.
Posted by Purna at 2:14 PM

Oh my god the Saffas have a turd!!! Is the Fire Alarm (as he'd get called over here) the answer to South Africa's increasing effeminacy? Will he herald the great return to Saffa Turdness, a period described in vibrant colours by the Aussie cricket historians, but pitifully concluded way before my time? And where's Frau?

Puzzled (and unable to spell),
Wes

so how long until he plays for the Poms?

Mock, every team can only have one ginger in the current squad. Otherwise the world bursts into flames.

At least we know the Aussies won't steal him, we have Ginge MacDonald. We don't know why we have him, but we do.

You know Collers is getting on a bit, though Purna, so Mock may yet be right.

Oh well Pu, it's what the Australian elders say, but I didn't believe them and had a bold sniff at the mint green cows and found them good.

Yes, Purna. I see exactly what you mean.

I second Mock's concerns. As much as I think Buttniggle is an ass (no pun intended) you need to use your powers keep him fit Purna, or the Saffers will lose him.

As for where I've been, I've just come back from 3 weeks easter holiday in Durban. Good to know I'm missed!