When Binga was injured for the umpteenth time Dougie B packed his bags and waited for the call. Actually, he might have waited even before Binga injured himself. Everybody knew it was coming. He is paying back mankind for unleashing his atrocious Hindi song upon us. One injured limb for every record sold.

But the call never came. Dougie waited with his tomato face till someone gave him a squeeze and said,
"The peacock is in its way, Dougie"

"Why Hildy why?" Dougie asked.

Dougie and Harris arrived at the IPL at the same time, both were easily the best bowlers of the tournament and both won matches for their teams. Dougie's team...eventually...won...the IPL!

So when the time came to replace Binga and Hilfy was still unavailable, most thought the new IPL3 champions AND the one who kept his Aussie colours with his IPL team, would be an automatic choice. But it was not to be. It was Ryan Harris who got the call, the same Ryan Harris whose chest is placed too highly, just like a peacock's.

How can Binga, one of the prettiest men in cricket, be replaced by Dougie tomato face? Getting people to come watch the games in the Windies is tough enough and on top of that they lose Binga and his applebutt. So they replace the butt, with a chest.

Dougie has none of this. I mean, the man makes Simon Katich look handsome for fuck's sakes! 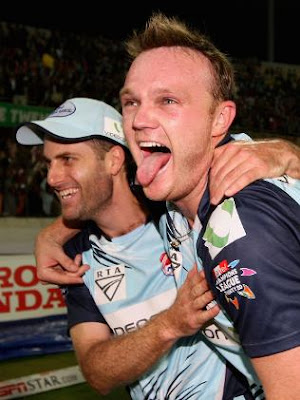 No, Dougie has no place in the Australian squad. Not when he is replacing Brett Lee. Not when the people will come back to watch Ryan Harris till they can figure out why his chest is so oddly placed.

Unless Witchy picks up an injury and McKay, MacDonald, Moises, McGrath and Bracken are all unavailable.
Posted by Purna at 8:24 PM

Interesting, I call him Dougie Alienface.

Perhaps it takes an accident to one man instead of injuries to so many bowlers? Btw, where's the promised injury on durby? The man's hitting match winning 49's ! Do something and fast

There's a slight problem raj...he is in my fantasy cricket team...

OK, maybe its just coz I'm from Perth. He's still one of my favourite calendar boys!!

MJ, if you like the scruffy beard...sure! But he was pretty apalling in the calendar...wasn't he topless, but not really because he is too hairy?

And on another note, have you seen the official mascot for the 2011 world cup? It seems a bit cruel to poke fun at smith like that, I'm not impressed.

Maybe it's because I'm from Perth but I concur with missjane about Katich. Amongst the aging hollyhobby dolls that seems to be the face of choice of most of the Aus team (with the honourable exception of Witchy) how can anyone think he is not a looker?

Frau, haha! I have seen it! It's an elephant with an ugly name. I have no clue why!