Since it's time for allegations again, I have one of my own. There is obviously an Indian connection, because no accusation is complete without a trail back to the subcontinent. Only in cricket though. For the rest of the world, no accusation is complete without a connection to the Middle East. But with Afghanistan making a mark, this may also be true in the world of cricket soon.

This is not a match fixing allegation but one of sabotage. The accused is Praveen Kumar and at the receiving end we have his beloved RCB team-mate and South Africa's only hope in the upcoming T20 World Cup, Jacques Kallis. The chosen method of sabotage was arm-wrestling, which was clearly meant to be a friendly match. But here's a picture of Praveen realizing in the middle that this is his chance to make sure that Jacques Kallis does not play when South Africa meets India in the group stages. Thus, he attempts to break Kallis' hand: 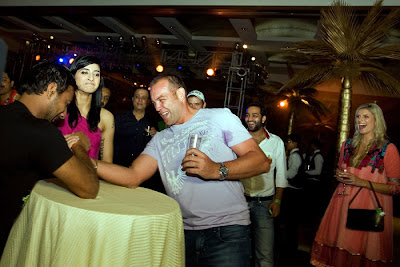 Picture courtesy of Prafs
Judging from Jakes' current form the plan may or may not have worked. But he is clearly in pain and one more attempt may put him out for a few weeks. And there may be more as Jakes is there for another 2 weeks or so. Realizing the gravity of the situation, my alien soon-to-be-adopted son (we have reconciled and are trying to be a family again), ROFL have volunteered to donate his arm to Jakes, in case Praveen succeeds. 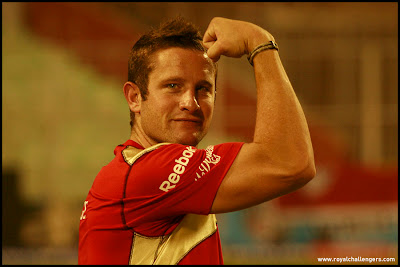 Picture courtesy of Official Website of RCB
That's right, team-mates for life! Oh and Praveen, even though he plays for Rajasthan, Morne wanted you to know that he is not amused. 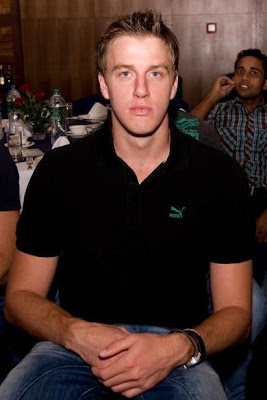 Morne is so cute.

Yeah Morne is gorgeous which is why he can get the good chicks. Anyone else think that Smith's chick Brigitte Sarembock is below the normal standard for WAGS. She seems to have been at the end of the queue when they were handing out looks. Unlike Morne. Ha!

more fuel to add to your behind-the-scenes fire:

There's also a lot of ROFL in the videos, like in the 'RCB Victory' one where he pesters the poor staff for champagne at the end.

We might even find some Morne if we look closely!

Morne has been invisible during this IPL.

Thanks bucva! That video was weird indeed! I guess since ROFL's not playing, he is keeping himself busy by stalking the camera!

Anon, don't worry, Morne will be invisible during the T20 WC as well.

I would like to exchange links with your site cricketminded.blogspot.com
Is this possible?

I would like to exchange links with your site cricketminded.blogspot.com
Is this possible?