Ok, so I had a moment there in the last post. But now I am back because SOUTH AFRICA IS THE NUMBER ONE TEST AND ODI TEAM IN THE WORLD!!!! I am delirious with excitement. It is irrelevant that it happened at the cost of an English win. England didn't win, Australia lost. That is what my Cricinfo tells me and I believe it.

I have been waiting for this day for ages. Frankly, I would have been much more happier if it had actually happened under Hansie's reign with Polly, Jonty, Zulu and Allan all in the team. That was the greatest South African team ever! BUT, I love this new team just as much and they deserve every bit of this title.

I wonder how this will change SA cricket. The Windies and Aussies were both indomitable during their years and feared widely because of their meanness. The Saffers are comparatively nicer. They also haven't won any big ICC trophies...yet. But I'm sure all that is about to change. Maybe not the niceness. I would hate it if they all became unnecessarily verbal...except for Bouch. He is hilarious!

I think the era of SA will be marked by calm and cool temperament, ferocious fights, great sportsmanship and of course many, many, many wins. Let the reigning begin! 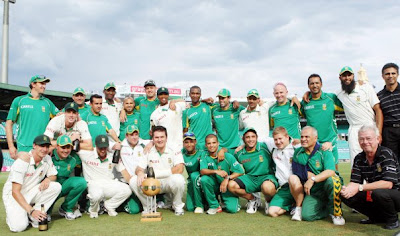 Who are the chokers now, bitch!
Posted by Purna at 3:31 PM

A psychologist would say that it is only because Bangladesh will never reach those heights that you have to find this happiness through another team's success. Not me, but a psychologist.

Until Soufrica win a tournament, the chokers tag will not be removed. Got to the semis of the t20 WC but were blown to smithereens by Boom Boom.

A psychologist would also say that you love your mum so much that you want to kill your dad marry her. I don't believe that, so I won't believe this either.

I am not commenting on the t20 WC.But, it's sad that you won't give your own team credit for a win :).

Purn, I'm glad. The saffas have been playing the best cricket of the past year and deserve the top ranking. The Aussies are shit and they need to get their act together.

Side note, Bouch is hilarious! My all time fav was his sledging of Tatenda Taibu "What's your average? 9.5 maybe so we'll give you 10". Terrible attempt but so hilarious!

Purn,
Yeh I do like to be tough on my own....helps them to become real men.

Psychologists are crazy, you're right.

Bouch, another Soufrican trying to be Australian. That's my fear girls, that the Soufricans, now that they are number one, will try to be like the Aussies.

You can be number 1 and still have people like you you know!

Es, I don't love Punter. I just don't dislike him vehemently anymore. Twins did you say? Tell me Es, have you ever punched someone and broken their nose? :D
I would love to be friends with Bouch, but I wouldn't date him. Harry is a different case...but I'll share if its you ;).

Stani, good guys are boring. Hence you are boring :D.
And he is Princess Di's son. Don't hate cuz he is hot.
SA would never try to be like the Aussies. They will have their own swagger. You just wait and see.
You plunging a dagger in my heart? Why because if you can't have me no one can?
See, I can make terrible jokes too.

Really Purn? Why don't you tell everyone what you really think, or shall I?

I'm gonna get Es on you.

Your jokes are worse than terrible by the way.

I don't know what you are talking about Stani. Please enlighten me. :P

Es would never choose between the two of us. She loves both of us.

Not even the good Lord can enlighten you Purn. Es would never choose between us because there is no choice - simple.

She can see a real man when she comes across one and is not a generalising bimbo who thinks all good men are boring. Keep thinking that and good luck :o)

Good men can be mysterious and mystery is attractive in a man, just ask a REAL woman.

I really hit your soft spot eh? You just made my day.

I made your day? Nothing's changed there then?

Purn, my dear the loyalty to my "boring" husband is overwhelming. So I am here to open a can of whoop ass. haha Stani is a darling and indeed rather mysterious...

I am very good with my fists but I don't believe I've broken a nose. My mates, too much alcohol and my nose is a different story & that's for another day... ;o)

I think we must be fraternal twins, I'd have Bouch & Haz the other way round! haha

As for your jokes, even Stani does better and that's saying something I've heard a lot of his jokes! :oP

I admire your loyalty Es. It's part of why you are awesome!
We must be fraternal sisters after all. We can friends with our respective husbands. It all works out perfectly.

I am working on my jokes. But Stani being English has an upper-hand. I've heard they spend their rainy days practicing.

Es, 'even Stani'? You must like sleeping on the couch?

Purna, actually, we spend most our rainy days wishing for snow (lets see if you get that)

...and my humour has nothing to do with my Englishness....plus, my DNA is kashmiri.

JOKE:
Two sausages in a pan and one says to the other, "It's hot in here isn't it?" and the other one says "aaaah, it's a talking sausage!". You have to laugh at that cos it's my little niece's.

Oh so you lot want to be Canadian? Why didn't you just say so.

I will smile at your joke.