You may brand me a traitor after this one, but these are rare times when my cricket sensibilities trump my biased love for Bangladesh and South Africa. I've disliked many a cricketer because they weren't Bangladeshi or Saffa (I know it's unreasonable. That is the definition for bias :P) and dismissed them as rubbish cricketers. I have now been proven wrong. What humbles me is the fact that I have been proven wrong by an Australian, which is a big pill to swallow for any Saffa fan. But I will do it. I will do it because people from down under have shown Biffy a lot of love after his heroic efforts. It's only fair that I reciprocate. Also, I don't like Graeme that much and think that Botha should be captain.

Punter and Biffy have similar stories. Both were touted as wrong choices for captaincy and both hated for their cockiness and insecure behaviour. Both grew up and emerged as leaders under the intense scrutiny of the media. But ultimately, both became heroes. We all know Biffy's story. Jeered at by Aussies, limbs broken by Mitchell Johnson, but still coming out to bat to save the last test match. Biffy was given a standing ovation, which he deserved. However, Ricky has upstaged him in this Ashes series. Because not only did Ricky Ponting take a lot of stick from the English and have his lips split wide open, he became the second captain in the history of Australia to lose the Ashes twice.

Yet, he refuses to question his leadership abilities. That is not arrogance. That is a firm belief in himself because guess what? The dude has a fabulous record captaining Australia. Yes, even my grandmother could have captained the team that had Warne, McGrath, Langer, Gilchrist and Hayden in it. But if that was the case, how did Australia lose the Ashes in 2005? And, how did Australia destroy South Africa in their backyard last season? We love to hate him because it's the easy thing to do...most people dislike Punter. But let's face it. He is an amazing leader and an even more amazing batsman. I honestly have never watched Punter play before last summer because I couldn't be bothered. But shit, that tiny, hairy bastard can bat! The fact that he could break Allan Border's record despite being under the continuous pressure of captaining the former number one team in the world, speaks volumes about his ability.

The main reason behind my empathy for Ricky is the fact that he was the only Aussie player in both the Ashes and the home series against South Africa that fought till death. I remember watching SA thrash the Aussies despite great scores from Punter and Punter only, and then Ricky having to come up to the podium to say how his team fought hard. No they didn't. The only people who fought hard were you and Mitch. But it's great that you don't hate them for their stupidity and continue to lead their sorry asses. It's even more awesome that you can do it twice in a span of 6 months. These are true leadership qualities.

The amount of respect that Ricky Ponting commands is astonishing. He has a FB fan page where English supporters have showed up to apologize to him for their embarrassingly bad behaviour during the series. I glanced through some of the 122 comments in the latest post and I think I came across the word 'respect' about 50 times. Apparently, even the English papers could not help but admire his grit and dignity at the face of defeat. Then again, the English are cunning like that. It could only be because they won.

So here's to Ricky Ponting. I admire your courage and bestow upon you the tag of Captain Courageous. Call me whatever you want but I firmly believe in giving respect where respect is due. Biffy at least had a trophy to cuddle with after all the pain. Ponting...well he doesn't even have the number one position anymore.

Two sides of the same coin? 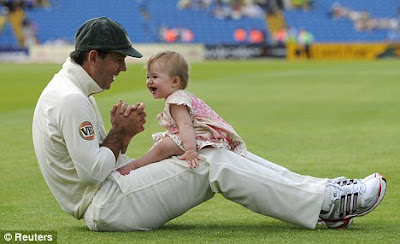 Ricky with his daughter Emmy
Posted by Purna at 12:27 PM

I'm warning AB about the new Saffa singer on the rise.

Bon,
You're either drunk or madly in love....or both. Never before have I had to cover my ears whilst reading something silently.

Purn,
It just proves how stubborn you are. Took you this long to admit that Punter's a gun?

One day you will also admit to liking Stani but something (like your response to this comment) tells me that this will be only in your last moments on your death bed, and even then you will say it in a way that will leave me wondering if you really meant it.

Bon is in love. Who is the lucky girl?

Stani,do you really think I will remember you till my death bed?

....when I'm plunging the dagger in your chest you're not exactly gonna be thinking of Shakib are you?..unless I come disguised as him...now there's an idea!

And its Purn not Burn by the way heeehahahaha(Oooo this kid is good!)

I am really torn here... finally some positive comments about my team and our cap'n, which we are only getting because we l... l... l... did not hold onto the Ashes. (Yes, still in the denial phase, people. It's been a tough month.)

Would I rather have a team that has some respect and loses, or a team that wins all the time but gets bagged by the rest of the world and some traitorous types in its own country? (*cough* Es *cough*)

I'd like to say its a tough question, but I'm Australian, so it's not really... I want to win! I want my mean, angry, unloved, undefeated team back!!

Err, sorry about that. Perhaps I am moving into anger after all. :) And in all seriousness, while in deep mourning for the loss, I am proud of how Ricky's handled it all... his interview after the umpiring travesties at Lords was a great example.

Missy! Though shall not speak of my Es like that!

Agree about the umpiring decisions, you guys got some stinkers. Time for techMology.

MJ I don't think I'm a traitor. The Saffas have played the best test & ODI cricket, they deserve the accolades.

The Australians of old were so good that the transition has been terrible. We've let the oldies hang on for too long, then replaced them with other oldies. We haven't given the youngsters a proper chance before we drop them (think Hughes).

I don't blame Punter, personally I don't like him but he's a good cricketer. His attitude sometimes leaves a bit to be desired but he has matured and this Ashes did prove that. I think the selectors on the other hand need an overhaul, just like the umpires/ technology system.

Agree to disagree or am I still the sum of evil?

OK, so clarify, I have this thing that if you're Australian you should support Australia. Not mindlessly, mind you. Look at the Poms - they have a long, proud tradition of supporting their team in the midst of endless whinging. And I did not say that thinking differently meant you were evil. FTR. :)

*And* it doesn't mean you can't support the Saffers (even if they are chokers :) - after all it's how I ended up here, and how I learnt so much about the Poms. I love cricket and am always happy to see good cricket and good cricketers... or good looking cricketers. *g*

Having said that, I don't really think Ponting's changed that much... I think there's a shift in perception happening. Interestingly, as the press overseas gets more positive, it seems to be growing more negative here at home. Might just be me.

AND (wow long comments!) Es I do agree re the old men. It is seriously pissing me off all the stuff about bringing back Warne (however light-hearted) - honestly, how do we expect anyone under 30 to *ever* make the team?

MJ as a Geelong supporter of many years I am well qualified (maybe less the a Richmond supporter haha) on sticking with a team. I do support the Aussies but they've frustrated me a bit recently.

I like good cricket and if the saffas are playing it I'll happily watch it for that reason. But really I felt the ashes was a battle of the shittier team to lose. It was B grade cricket from both sides.

I thought Punter tried, but it's too little too late. Mind you the media do enjoy bringing people down here in Oz. We're very tough on our sporting stars because like you said we like to win!

LOL. Missjane, you mostly see a man's true character in defeat. And Punter handled it well. It's sad that the press at home is getting so negative with him. But people on his FB page seem to love him. Someone wants to knight him!!! LOL.

Es is evil. She is my fraternal twin after all :D.

I'm not a Punter fan. But you can see the difference. He could afford to be an arrogant SOB when he had the players to back him up. Now he hasn't got the best of teams, so he had to tone down.

Never liked him, but I always love watching him bat.