Herschelle Gibbs is my hero

I've been thinking a lot about what my first post should be on. I thought it should make a statement, then I thought it should be a work of fiction regarding cricket players and their secret lives (I might still do that later) but I finally decided to succumb to my undying love for South African cricketers. I'm not even South African and my country has it's very own super star producing, giant killing, never to be written off team. But I pledged my heart to them when I was eleven and there is no returning it. Hence, my first post is about one of my most favourite South African.

I can already hear your murmurs of alcoholic, match-fixer, weed smoker etc. But these are exactly the reasons why I love Herschelle Gibbs. He is messed up, which makes him interesting. I would love to have a chat with Hersch over a few drinks and play pranks on his saintly team-mates while high. I reckon we would have gifted Jacques with a hairband, left a real croc on Dale's bed and dressed up like Megan Fox for Mark!
He should also be given some sort of award for coming back as many times as he has. He makes mistakes, learns from them, fights for his place and smacks his critics in their faces with his bat. He is a survivor and that makes him a hero in my books. I would say that Hersch's only weakness is that he's not very good at covering his tracks...and has poor taste in women! Honestly Hersch, of all the girls in the world, you had to marry the gold-digger!

I can't for the life of me figure out why anybody would have a hero who has no flaws and had a life that is only possible in Pleasant ville! It doesn't show character at all. No offense to all those well behaved, peachy, momma's boys in cricket (God knows there are enough of them!), but unless you have had a taste of the dark side, you ain't making my Heroes list. My blog, my rules.

Of course no post about Gibbs would be complete without mentioning the six sixes and the epic 175 against Australia in the 438 game. Sure the six sixes was against the Netherlands, but hey aren't they the same team that beat England in the recent 20/20 World Cup? And what can I say about the 175? I too stood up with the 50,000 Saffers at the Wanderers to salute him. And yes, there were tears involved. After all, my hero had just played the innings of a lifetime. 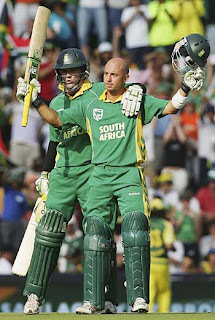 Take a bow, Herschelle Gibbs
Posted by Purna at 12:32 PM

Welcome Purna!
I have added you to my blog roll and am following you. Looking forward to your posts.

Hersch is amazing. He apparently cleaned himself up. He went to rehab, doesn't smoke or drink anymore. Everybody loves a successful comeback story. If he ever writes an autobiography it wouldbe the most interesting one ever.

I like that picture. AB trying to steal the shine.

I know Bella, I am really looking forward to his autobiography as well!

Haha. AB trying to steal the shine! Is that why he is always the first one to congratulate his mates then? lol.