I am not completely saddened by the result or the ending of this tournament. It's not because of cricket overkill or because I have suddenly started liking the Poms. It's because the winning moment came off the bat of the Englishman I can tolerate (as a cricketer strictly) and the Aussie bowler I would like to vanquish from this Earth. That was the only part of Michael Clarke's captaincy I was grateful for- making sure that the winning runs came off the petulant brat.

I am also glad it's over because the tournament has strangely been like the La Liga, only two teams dominating all the rest. The quality of cricket, I think we can all agree, has been subpar and this time, it's actually because barring the two finalists, the rest sucked balls. I don't think at any moment, any of us didn't know what the outcome of the game was going to be, unless two horribly out-of-form teams were playing. Okay, maybe the Kiwis were the only exception. I thought they should have made the semis.

For me, only three matches were really interesting to watch - SL vs NZ, NZ vs Pak and the Aus vs Pak semi. The rest put me to sleep and I actually got to watch these matches during the day at decent hours. If you didn't really care who won the finals (I did care, but not so much), it wasn't fun to watch either. But it could also be because I had to drive two hours in traffic and only got to watch England bat. Watching Dirk Nannes not take wickets is painful. Kieswetter's wicket abated my pain slightly though. What a fucking embarrassing way to get out! I loved it!

KP was magnificent but I never enjoy watching him doing well. I did like this ridiculous picture though: 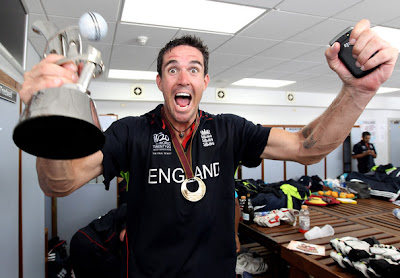 I also enjoyed bloody Nasser saying 'Surely, even England can screw it up from here', when they required 29 runs to win. Oh these Poms! They never believe in themselves!

I can understand why they get along so well with them South Africans.
Posted by Purna at 4:27 PM

"I can understand why they get along so well with them South Africans."

haha.. England finally earn glory thanks to Saffers, Irish, Paki, and whole lot of other nationalities.

Don't forget the Zimbabwean Mock. That is a crucial factor in their winning equation. But they did play very, very well. I think the Ashes is going to be interesting this year.

That ridiculous picture is currently on my locker at work, courtesy of a colleague or two who thought it would be funny.

Sid, your comments make my day.

I hope you don't think I'm joking - it really is. It was supposed to annoy me, I just took out a marker and went nuts.

Pietersen is the only one of the players who grabs the trophy and poses with it as if he was the captain, you see no other guy doing that except for the actual skipper; he is also the only one that clung to Colly all the time to be in the pic with him. GAWD. And I thought he had a life now.

Pom Hunters, on your marks!